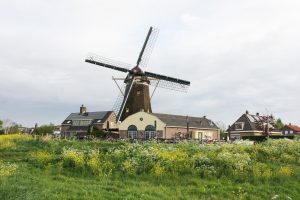 The corn windmill Windlust stands on the edge of Nootdorp, along the road which runs from Nootdorp to Pijnacker (the Oudeweg) and overlooking the nature area called the Dobbeplas. The owner of the windmill is the Foundation ‘Vrienden van de Windlust te Nootdorp‘ (Friends of the Windlust in Nootdorp).

History of the windmill

The octagonal timber framed body of the windmill Windlust was moved from Delft to Nootdorp in 1885. The windmill was built in Delft in 1781 on the Hopsteegse tower (between the Oostpoort and the Koepoort). There it was used as a tanning mill (for grinding oak bark) and the owners were tanners. Due to the transition to steam power, the windmill became superfluous and in 1885 it was dismantled and sold to the miller in Nootdorp, Huibert Blonk.

The first stone was laid on 17 August 1885 by the millers 5½ year-old son Leendert. Mr Blonk did not live long to enjoy his acquisition. He died in the beginning of 1886 at the age of 61. He left a wife and ten children behind. The widow Blonk-Verhoeff sold the mill to Arend Blonk (born in 1853) the second son out of Huibert’s first marriage.

After this the windmill changed hands a few times. In 1922 Mr. Hendrik Jongste from Kethel came to work for the farmers co-operative as the miller. He became the owner of the windmill not until 1955. We know, among other things, that during the Second World War years Mr Jongste was always prepared to mill grain for those who had little or no money. In 1947 he was one of the first people to install ‘fore-sails’ with automatic brakes. However it was becoming increasingly difficult to earn a living from a wind-powered mill. In 1951 the windmill ceased to work commercially.